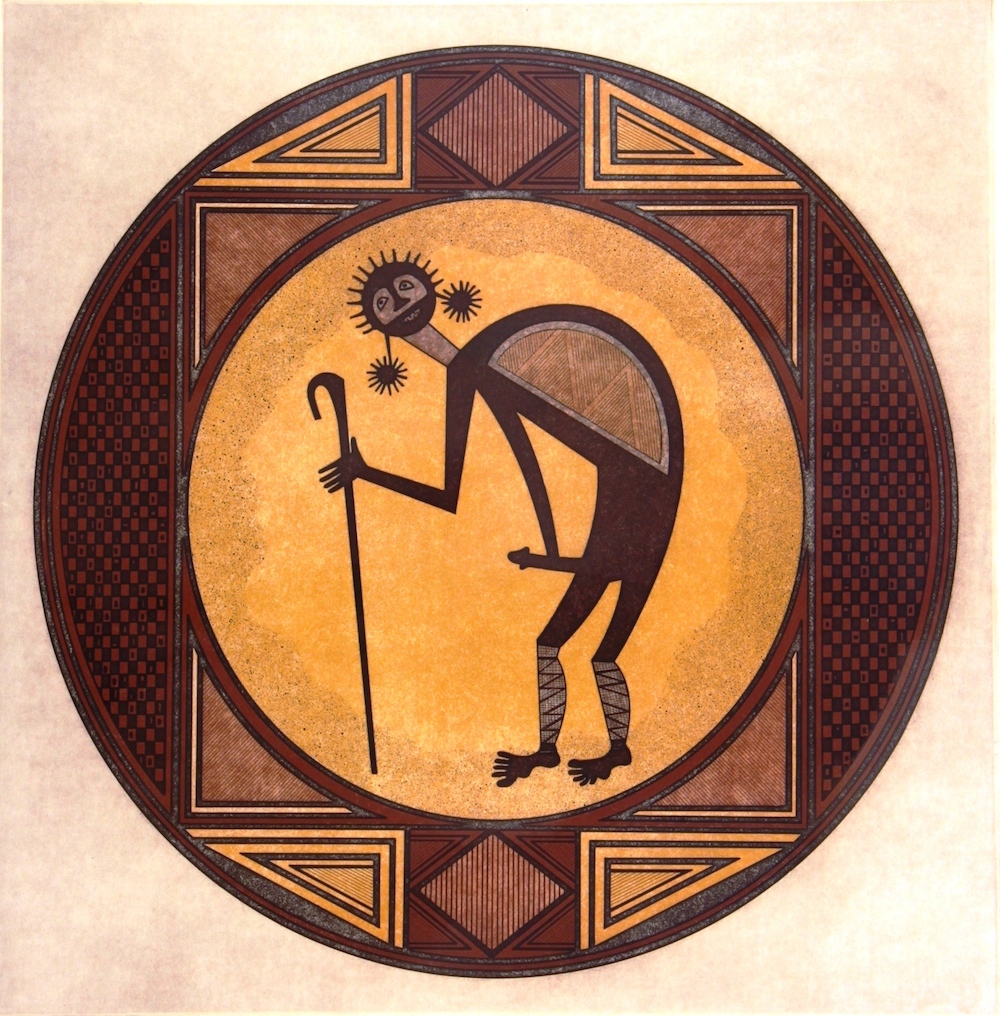 Santa Clara Pueblo artist Helen Hardin (1943-1984) is considered one of the 20th century’s most significant Native American painters and printmakers. Known for her strong sense of individualism and a modern, linear style, she rose to fame in the 1970s in a male-dominated art world. Hardin helped break boundaries in Native art at the time, moving away from traditional “flat style” figurative scenes while influencing a generation of artists. Featured on a 1970 cover of New Mexico Magazine, Hardin was lauded for bringing a “new look” to Native American art. The nation took notice of her intricate, geometric compositions, and her popularity soared.

Due to the detail Hardin achieved in her imagery, it took a long time to finish a single painting, so her output was limited. She began experimenting with etching in 1980, in part, to produce work in limited editions to satisfy collector demand. The linear quality of her work was quite suited to the etching process, and it became an important medium for her. After Hardin was diagnosed with breast cancer at the height of her career, she continued to create art until her death at age 41 in June 1984. The countless hours dedicated to each print display Hardin’s relentless determination for perfection. Her drive to create and express herself resulted in meticulous compositions and a lasting artistic legacy.

This exhibition features all 23 first editions of the artist’s copper plate etchings, completed in Hardin’s last years. Accompanying the prints are select copper plates used to make the images, as well as an exploration of the etching process. With artistic traditions often passed down through generations, this exhibition also includes select works by other women artists connected to Hardin through family or Santa Clara heritage: Hardin’s mother, Pablita Velarde; Hardin’s daughter, Margarete Bagshaw; and several members of the famed Tafoya family, including Tammy Garcia.

I feel this need to do a series of my best works to show the noble women for what they are: intelligent, thinking, hard-working and spiritual. This is the goal I hope to reach through my etchings.

James Museum members, please join us for a reception to celebrate the opening of Spirit Lines: Helen Hardin Etchings.
Friday, January 10 from 6:00 – 8:00 p.m.

Your membership corresponds to the number of people you can bring, but if you would like to bring guests beyond that, guest tickets will be available.

When reserving online, please remember to login as your reservations and your guest tickets are directly linked to your account online.

Each membership level includes a limited number of complimentary reservation tickets for member previews. Guest tickets will be available for purchase at the door.

Reservations will be accepted online or in person until January 3.